Posole in the Making 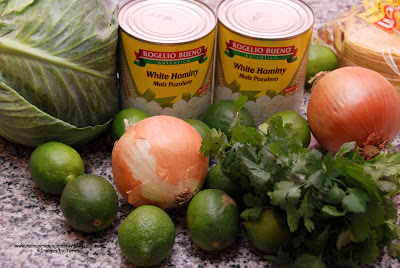 When I married into this family I realized pretty quickly I would have an entire new way of cooking to learn and I was up for the task. Growing up and surrounded by many great cooks I had already mastered a number of meals that I enjoyed serving family and friends. That was 33 years ago! Today I can pretty much hold my own ground in the kitchen and absolutely enjoy cooking! In raising our children it was important to me that they embrace both my husband's Mexico cuisine and my southern cuisine! Its kind of funny where we merged and adapted some recipes to both of our likings. For the most part we have managed to raise four kids and none of them are too picky. The adult children will come back home for certain meals with just a phone call that says guess what we are having for dinner tonight. And our son, Preston, well lets just say when I call and say I am cooking Posole I might as well set out several extra bowls because he is going to invite a few friends to come home for dinner!

Step #1
Brown pork tenderloins and cover generously with garlic, (about 2-3 Tbsp. of minced garlic) salt and pepper. I sometimes use my waterless cookware and sometimes I use my crockpot. Depends on how much time I have to cook my meat. You will need to add several cups of water to make broth. This broth will become part of your soup base later. 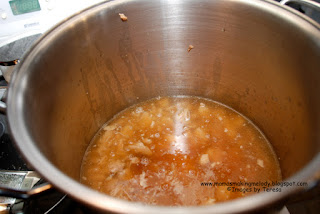 Step #2
Sometimes I take time to "roast" or blacken my peppers on a cast iron griddle and then proceed with the  next step. Kind of depends on how much time I have and honestly I am not sure that my family can really tell the difference. In a separate pan add the red peppers and cover with water and a lid. Allow them to simmer until they soften up and shrivel up a bit. I included a picture for you so you would know what they should look like! Usually takes 10-15 minutes and I just turn the burner off and let them set until they cool down a bit. Now comes my least favorite part of this job and if you can recruit a kitchen helper it will be less time consuming. After-all it is a family tradition to gather in the kitchen and many hands makes for lighter work.  Cut off the stem end and split open the pepper and scrape out all of the seeds. Yes, I said this was my least favorite part of the job! [it is very important to remove all of the seeds-they are hard and do not dissolve plus if you bite into one they have a bitter taste] 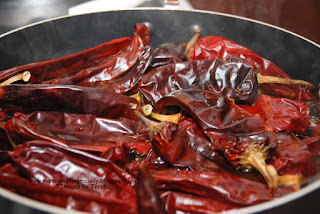 Step #3
Pork tenderloins cooking...... note: in my most humble opinion you cannot put too much minced garlic during the cooking process of the meat 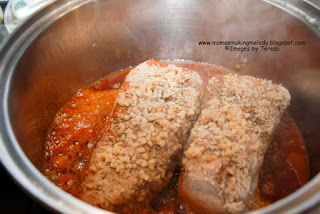 Step #4
Place the stemless and seedless remains of the red peppers in your blender or Vita-Mix and add about a cup of water - and yes I use the water the peppers were cooked in! Blend very well. The goal is not to have pieces of skin showing. If your blender does not completely blend all of the skin you can pour it through a collander to remove any pieces. 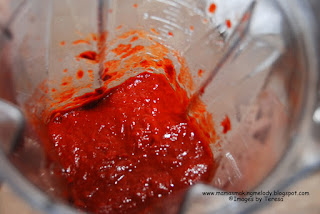 Step #5
Add pepper mixture to simmering broth and add water to consistency of thin soup broth. Add chopped meat, hominy, and oreagno. I usually add about 1-2 Tablespoons of dried Oreagno. This is one of the unusual spices used in this soup! Add salt and pepper to taste. Bring soup back to simmer and serve with the following garnishes! 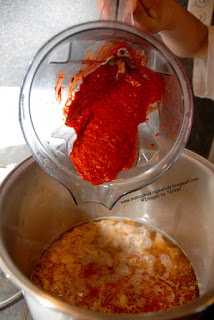 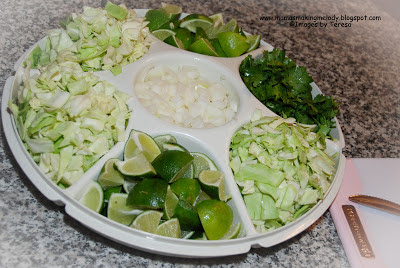 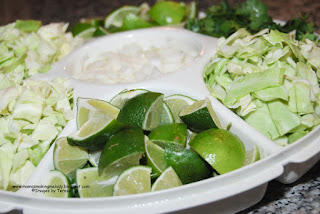 Step #7
Not mandatory, but my family thinks I am cheating if I try to serve store-bought chips, so to the chip factory we go! I use store-bought corn tortillas and cut them into strips and fry them in a cast-iron skillet. Use about 1/2 inch of oil and make sure it is really hot before you begin placing them in the skillet! Keep your layer single for best results. Drain on paper towels and add salt immediately. 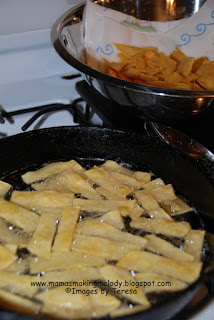 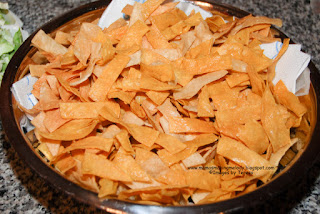 Finished Soup...... (note the big pot is full...... the red chilis are strong which enables you to add a lot of water for making the soup broth) 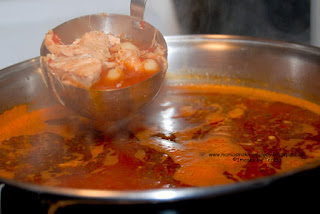 At Last: The bowl of garnished soup; ready to enjoy! 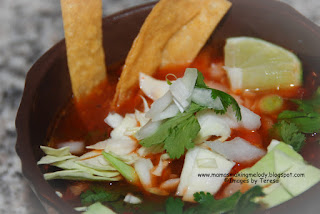 “If you knew how to cook, maybe I would eat," Jace muttered.

Isabelle froze, her spoon poised dangerously. "What did you say?"

Jace edged toward the fridge. "I said I'm going to look for a snack to eat."

That's what I thought you said." Isabelle turned her attention to the soup.”

Till next time my coffee cup and mouse meet.....
Teresa 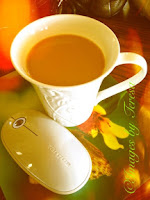 Posted by Teresa Montalvo at 8:41 AM

Comments are always fun and are most welcome!